Switzerland's official contact tracing app has been officially available to everyone since the end of June. It is intended to help stem the spread of the coronavirus. The app was developed by EPFL, ETH Zurich and the company Ubique. In this article we will show you how the app works and what contribution TestingTime and Ubique have made to this project. 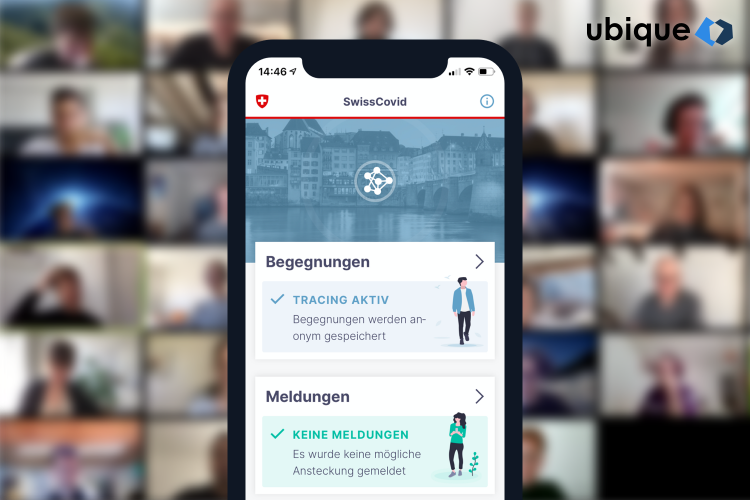 2. Switzerland’s official contact tracing app
2.1 From the first brainstorming to the first product
2.2 Swiss team work for a Swiss product
2.3 System support by Apple and Google
2.4 Privacy and security by design

3. Simplify technology to push usage
3.1 A target group difficult to reach
3.2 On-site testing despite Corona
3.3 Terms of the test

4. Dedication and commitment of all involved

1. Digital products that make an impact

In 2010, when Ubique was founded, the topic “mobile applications” was still quite new. In the same year, the American Dialect Society even listed the term “app” as word of the year. The “new territory” didn’t stop the young company from focusing exclusively on the development of mobile applications. On the contrary, they saw the great potential early on. From day one, the goal was to develop cool products that were interesting and relevant for its end users. With the products developed by them, Ubique wants to improve the digital everyday life of mobile end users.

Today, Ubique has almost 40 highly skilled and motivated employees. Despite the large number of employees, they have kept their agile spirit. Quality and efficiency are embedded into the companies ethos and are incorporated into the companies daily activities. With their in-depth know-how, they now support various companies in major projects with new technologies. Their technical competence, their user-centred approach and their great interest in modern technologies make them the ideal partner for innovation projects.

Ubique is based in Zurich, but operates worldwide. All of the company’s products are internationally scalable. For project management, they rely on a hybrid solution between sequential and iterative approaches, which has proven itself time and again. The focus lies on testing the products to ensure a good user experience. Functionalities are tested internally as well as externally by means of usability tests.

The SwissCovid App, which is available free of charge in the Apple Store and Google Play Store, supports the prevention of virus spreading with contact tracing. Contact tracing is used to find close contacts of people infected with the coronavirus. The more people that use the app, the more effective it is. However, this short video explains exactly how the app works.

2.1 From the first brainstorming to the first product

The idea for today’s SwissCovid app came to Ubique at the end of March. They discussed the question of what role Ubique as an innovative software company plays in this coronavirus situation. And above all, how digital products can be used to overcome such crises. In the process, they quickly came across Marcel Salathé and his “One Step Ahead” concept – although only on Twitter for the time being.

During this whole journey they were, of course, inspired by already existing and widely discussed solutions from the Asian region. However, Ubique wanted to show that these solutions can also be implemented “better” or with respect for privacy. In the course of the hackathon #CodeVsCOVID19 they spent day and night working on the realisation of their idea. Within a short, but extremely intensive time, their first own version was ready: The Next Step app.

At the same time, EPFL and ETH Zurich were working on a similar concept with the same objectives. Thanks to the great media interest in Ubique’s first solution, the cooperation with the two technical universities was quickly established. Both sides were developing a technically related solution. After the merger, all parties were able to focus on their strengths. This cooperation led to the “DP-3T” project. At the end of April, the Federal Office of Public Health (FOPH) finally announced that it would develop an app based on this project.

An order from the Swiss Government came a short time later for the official Swiss app – today known as SwissCovid App. Ubique was able to contribute its experience in the field of security/cryptology and the implementation of communication via Bluetooth. They were also mainly responsible for the user experience and the UI design based on the experience of the Next Step app. During the peak development phase of the contact tracing app, up to 80% of the entire Ubique team was involved in the project.

2.3 System support by Apple and Google

Inspired by the worldwide commitment to the fight against the coronavirus, the international players Apple and Google also joined forces. Like the SwissCovid team, they are pursuing the goal of providing the best possible protection for people with digital solutions and accelerating their return to everyday life. They enable the use of bluetooth technology to help governments and health authorities to contain the spread of the virus. As part of this partnership, the two giants have published draft documentation for an exposure reporting system that allows contacts to be traced while maintaining privacy. In addition, their support helped to solve challenges such as rapid battery consumption, as the app is always running in the background. Before the system support of the two companies, this couldn’t be solved in an optimal way for the end user.

The protection of the users’ privacy has always had the highest priority in the development of the SwissCovid app. The media response to the app’s data protection is huge. However, this doesn’t surprise Ubique, as there are unfortunately many solutions that don’t sufficiently protect the data of the users. For this reason, however, they have chosen an architecture that does not allow the misuse of data. Those who have already installed the app already know: No personal data is collected. Notification is automated and anonymous, because only an encrypted code is exchanged when an encounter occurs.

During the testing of the demo app, many test users were surprised how fast the installation was done. And most of all, they were surprised that really no personal data, such as name or telephone number, had to be entered. The users successfully installed the app in just a few steps. Ubique has once again succeeded in simplifying complex technologies in such a way that nothing stands in the way of uncomplicated usage.

However, the user-friendly handling and design didn’t pose the greatest challenges for them. To explain the content or the purpose of this app as simply as possible during the onboarding process wasn’t so easy at the beginning. But thanks to many testings and valuable user feedback they were able to solve this problem and optimise the onboarding. 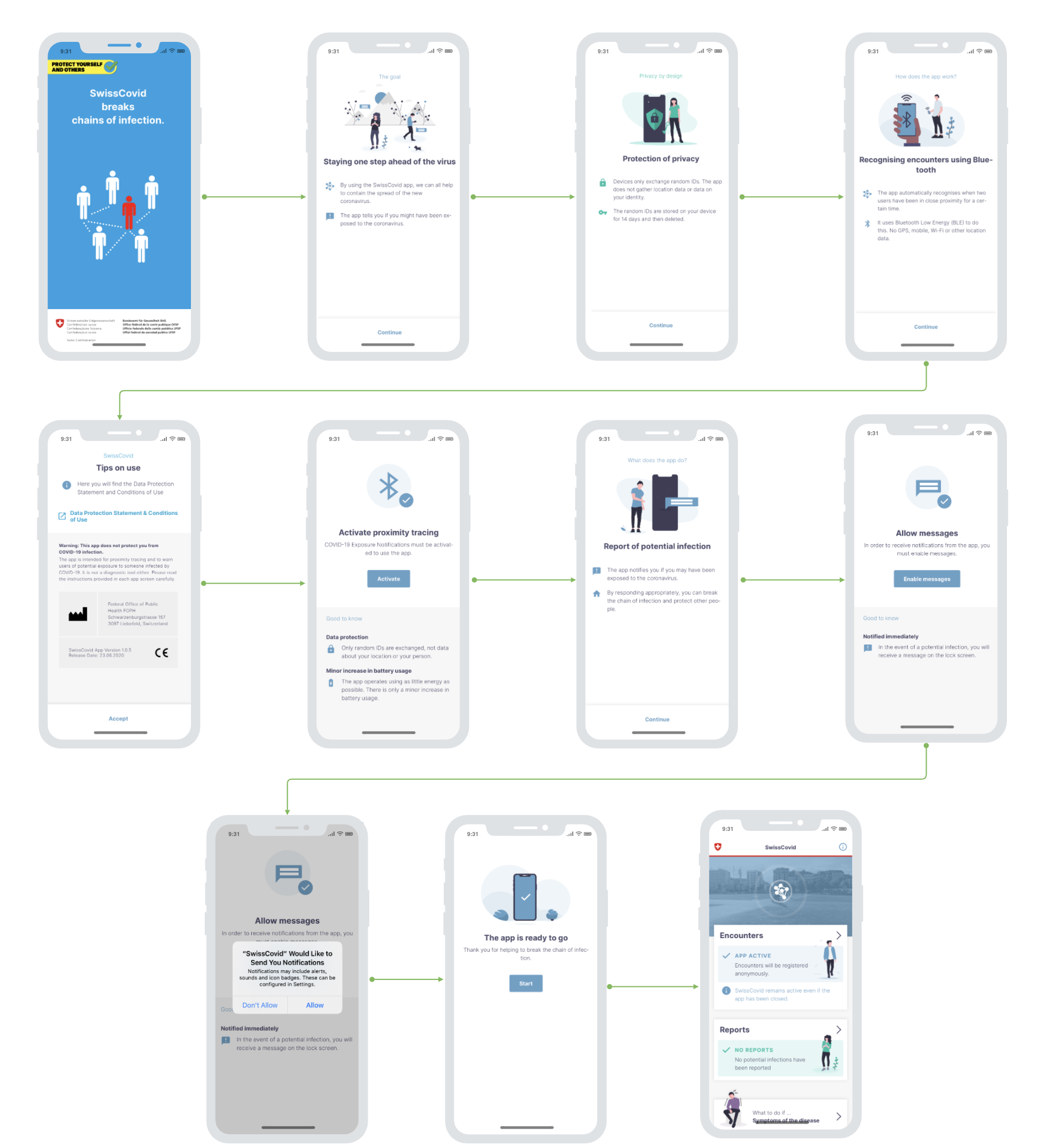 The onboarding process when installing the SwissCovid app.

3.1 A target group difficult to reach

During the development of the SwissCovid app it was tested again and again by all parties involved. Among them were students of the EPFL, the ETH Zürich and also employees and friends of Ubique. However, Ubique was aware that before the big launch of the SwissCovid app, a final testing with an older target group had to be done. The desired profiles couldn’t be found in their own environment so soon before the launch.

They were looking for people aged 70+ and they were supposed to be smartphone users. TestingTime had already made itself available at an earlier stage and offered Ubique support in usability testing. It was extremely important to the UX team of Ubique to not miss a specific need of this user group and thus jeopardise the success of the app with older generations. Therefore, they decided to use the services of TestingTime for testing this specific target group. 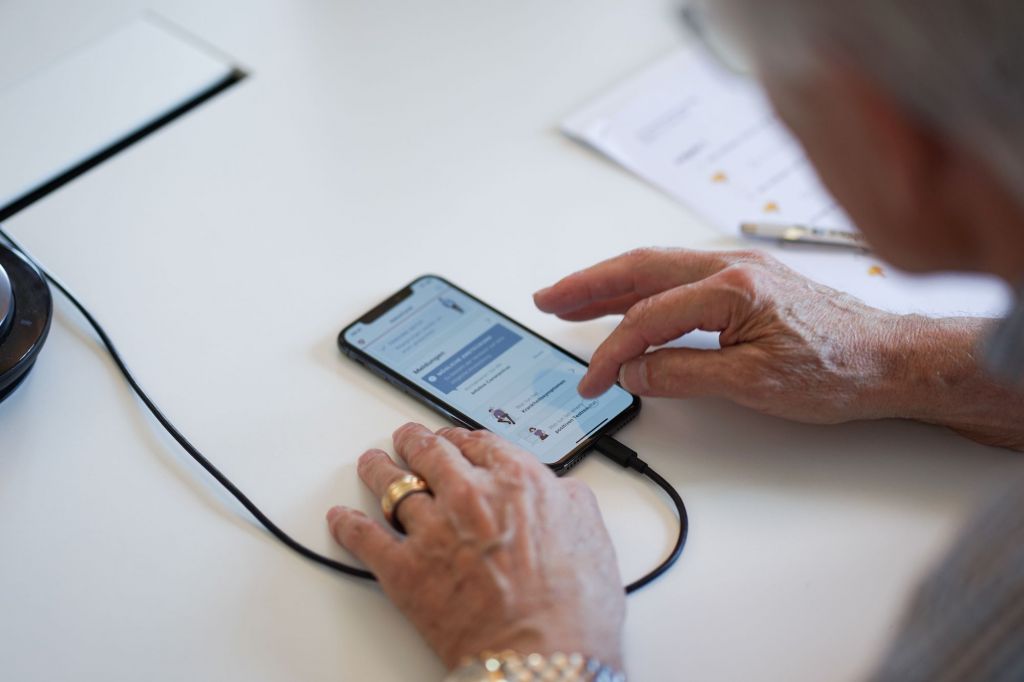 Ubique conducted the tests in Zurich, at their office. The reason for the decision to test on site, despite the pandemic, is quite simple. It was tested with a demo app that wasn’t yet available to the public. Since the first easings of regulations had already taken place and the coronavirus protection concept was followed, there was no reason not to carry out the tests. The test users were well instructed beforehand. After their arrival they found a table with disinfectant for their hands in the entrance area. A minimum distance of 2 metres was maintained at all times during the entire test. In addition, a plexiglas wall separated the test users from the person responsible for the test. After each test user, the person in charge disinfected the equipment and tables and ventilated the rooms accordingly. 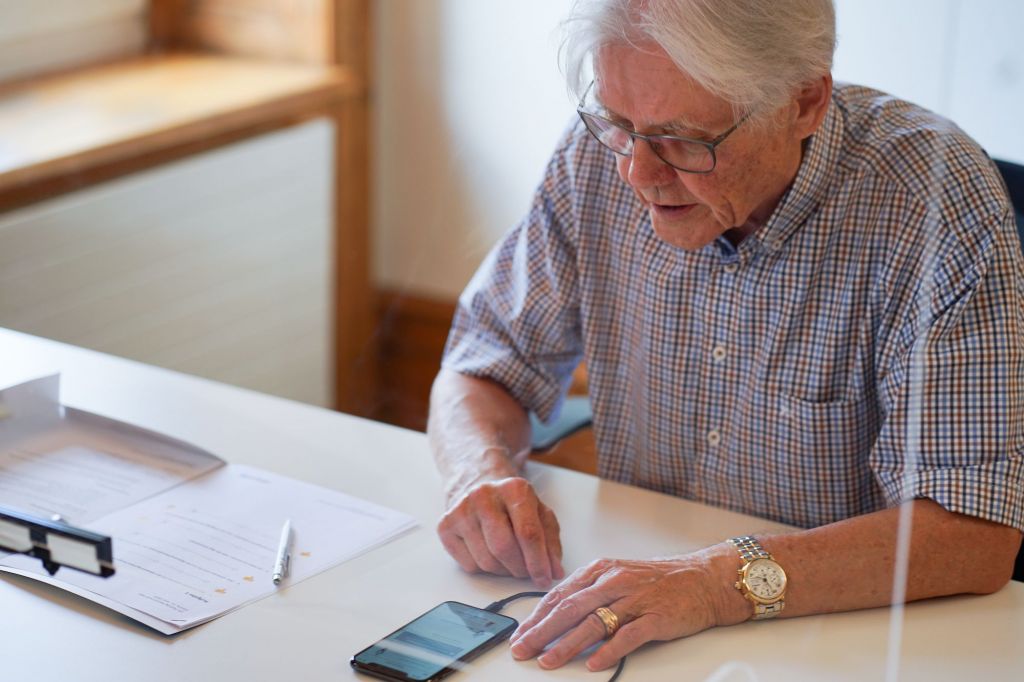 The safety of the test users was ensured in accordance with the coronavirus protection concept. As there was a plexiglas partition wall, the test users didn’t have to wear face masks.

Ubique provided the test users with a smartphone for the test. For each test user they chose a phone that was as close to their own personal mobile as possible for ease of use. It then meant that test users didn’t need to bring in anything with them to the user test and it mitigated a potential coronavirus related issue too. To be able to evaluate the tests and draw conclusions, Ubique recorded the conversations and actions with audio-visual means. Of course, they have obtained the permission (signature) of the test users in advance for the video recordings. In total, the interview with the users lasted 60 minutes. 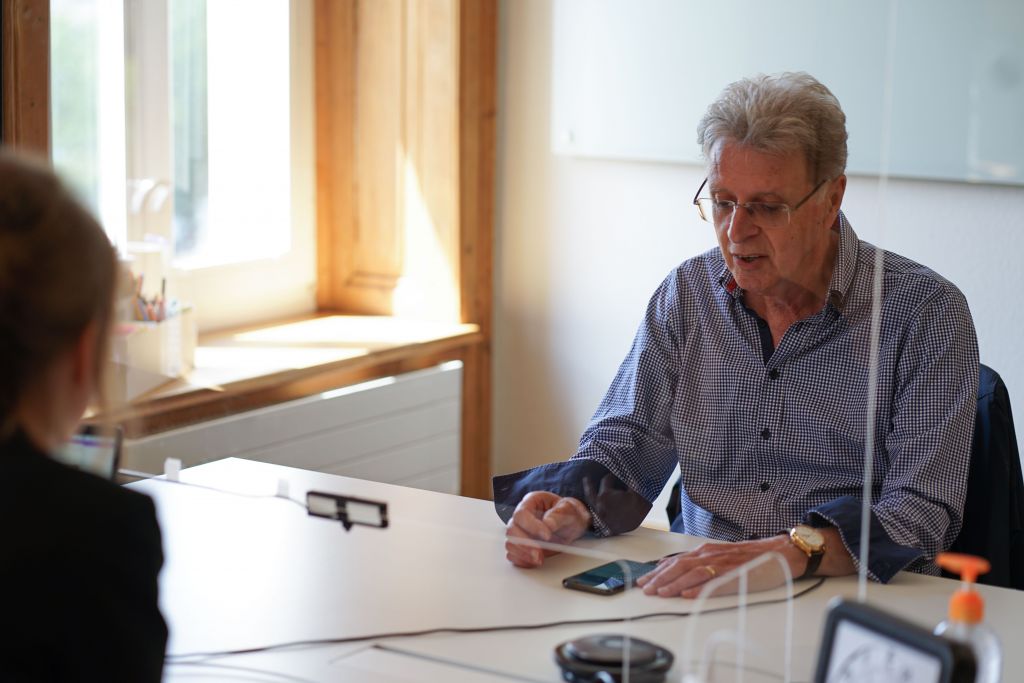 The test users were proud to have supported the Ubique team with their feedback.

4. Dedication and commitment of all involved

What has impressed Ubique most about this project is the dedication and commitment of all the people involved. TestingTime’s test users were also able to make their contribution. They were all very interested in giving feedback in as much detail as possible in order to tackle the problem together. Thanks to the feedback, the last uncertainties of the development team, before the official rollout, could be removed. No further testing of the SwissCovid app is planned as Ubique regularly receives feedback from the many active users of the app. 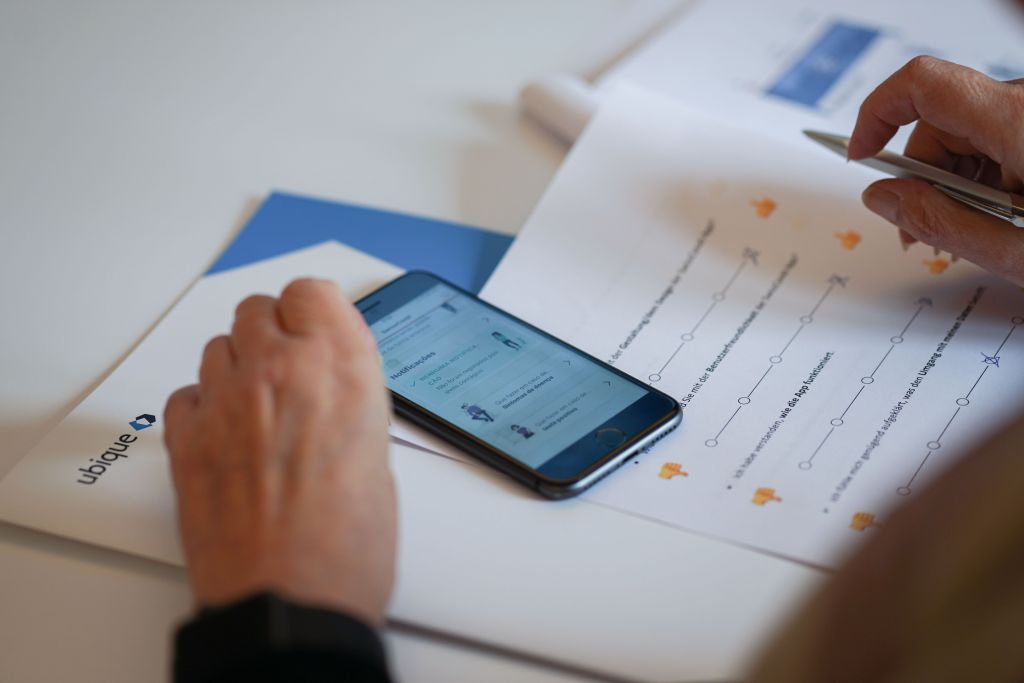 Relevant feedback from the last test with the desired user group.

Ubique is a young, well educated and motivated team. They love to deal with new technologies and have broad interests and skills in the areas of computer science, project management, user experience, design and user psychology. Thus, they bridge the gap between technology and people and are therefore well equipped to meet challenges from a wide range of industries. Curious? Find out more here.