The Google Design Sprint is a familiar design method for UX researchers, designers, or product managers. The design sprint not only compresses months of work into five days—during the sprint, you also incorporate insights and feedback from potential customers. For a manageable investment, you will get to the solution faster, increase your chances of success, and minimise the risk of later failing with the developed solution. Wyte, a customer of TestingTime, uses this method both for its own innovations and for those at its customers. In this article, you will find out exactly what that looks like and how they use the TestingTime’s recruiting service in the process.

1. From digital marketing manager to entrepreneur
1.1 Start-up-as-a-service for corporations
1.2 Part of the customer’s innovation team
1.3 No innovation without user testss

4. Get regular feedback and be honest

1. From digital marketing manager to entrepreneur

Susanne Flug, CEO and co-founder of Wyte, originally comes from the world of marketing and worked in the music industry for many years. In the consulting and agency environment, she supported various companies in the field of innovation management in developing new business models and digital products. This is how she came to meet her co-founder, on one of these projects, and after several projects together, she decided to found her own company with him. Susanne and her colleague took the chance to use their joint skills to expand their offering, to grow, and to gradually consolidate the customer base. Today, they manage their entire business through Wyte.

Wyte has a wide range of customers. All sectors are represented, from the automotive industry to insurance providers and energy companies to media companies. Wyte is often classified as a consulting company by new customers before starting a joint project. But there is more to Wyte than just pure consultancy and creating documentation for problems and its solutions. On the contrary, Wyte pitches in. All of Wyte’s employees come from the start-up sector. When it comes to customer assignments, they bring precisely this start-up mentality into the company and also act like a start-up there. This is exactly what distinguishes them from classic consulting. They help implement the projects, or implement them all by themselves, and don’t just leave it all to the customer to do that.

1.2 Part of the customer’s innovation team

At Wyte, the collaboration with customers is much more interactive than in classic consulting. They are part of the team right from the start, frequently including teams within larger corporations. These teams often have an idea and then get stuck in the implementation because they don’t have the necessary resources. Sometimes they just have a problem though, for which Wyte supports them in finding a solution. This means that Wyte provides all required roles. And that is what distinguishes them from consultants. They offer everything from a single source. The Wyte developers build the prototypes, the analysts test them directly on the customer, and the product specialists let them flow back into the iterative stages of development. This is repeated until the prototype has MVP status and until the first version of the product is made. Wyte then slowly steps back from the project.

1.3 No innovation without user tests

User testing plays a key role at Wyte. Many of its customers have neglected the tests far too often in the past when developing digital products. Or they didn’t perform any tests at all. Often, it was, or is, difficult for them to speak to just one potential user, let alone even find one in the first place. Large companies, in particular, are sometimes bound by regulations that prohibit them from discussing a raw idea with external people before it has been approved by various authorities. Furthermore, they sometimes lack experience in the area of idea validation.

However, Wyte makes sure that potential users are spoken to for every project. No idea is implemented without first speaking to the potential users. Validation is one of the three pillars at Wyte that are strictly adhered to. And it is a central pillar for the success of the product. Suitable test users are recruited at TestingTime. Wyte tests the ideas for a large number of different projects and customers with test users from the appropriate target group on an ongoing basis, often even weekly.

2. Faster implementation of own innovations with Google Design Sprints

In addition to the innovations that Wyte drives for customers, they also develop their own solutions. They get the inspiration for these from their own everyday work, or their customers’ work, and their customers’ problems. Wyte proceeds in exactly the same way with their own developments as they do with their customer projects. They regularly discuss various problems and possible solutions to these in very small teams. Similarly to when at a customer, they develop the first prototypes after a brainstorming session. And they implement these very early on, very quickly, and in very short cycles.

If the idea or prototype is not convincing, they quickly discard it. They are able to do this without a guilty conscience, because it does not involve a lot of effort or high costs. Right in line with the Google Design Sprint ideology. They have been pressing further ahead with one of their current ideas, or a current product, according to this principle since this summer.

However, they have adapted the development process a little for their own purposes by shortening certain processes after the initial learnings and lengthening others somewhat in return. Wyte roughly adheres to the structure provided by Google, but has made a few individual adjustments within this structure. For example, they use some tools that Google suggests, but some they don’t, because the effort would be far too great. And they try to act as much as possible like a start-up in this area as well.

2.1 Small teams with a clear focus

Wyte works in a mixed team for all of its projects. It is always deliberately a small team. According to Google’s guidelines, anything above 8 people is ineffective. Only four people are working on the current product: one business person (or product manager), one designer, and two developers. All four people are also involved in the user tests, so that everyone has the same level of knowledge and no important findings are lost. Every person involved finds out 1:1 what the potential customer thinks of the product.

2.2 Quicker answers than with traditional methods

For Wyte, the Google Design Sprints are exactly the right method because of their speed. Many of its customers also believe in this, and use this method with Wyte’s assistance. Of course, Wyte also adapts its innovation methods to the customer sometimes. However, the pressure to develop something very quickly and in a focused manner brings certain advantages. For one thing, you only do what is necessary. When you have more time, you often do too much. In principle, you can validate hypotheses about the idea you have at the end of every week. If something doesn’t work, for whatever reason, or is not accepted by users, you can quickly discard it. And you can do so systematically. This way, you avoid falling too much in love with your own idea and holding onto a solution that interests nobody for too long.

Wyte has been carrying out these weekly tests for the development of its current product for over two months. In other words, they have a prototype every week, which they either develop further or build again completely from scratch after testing it with five potential users every Friday. 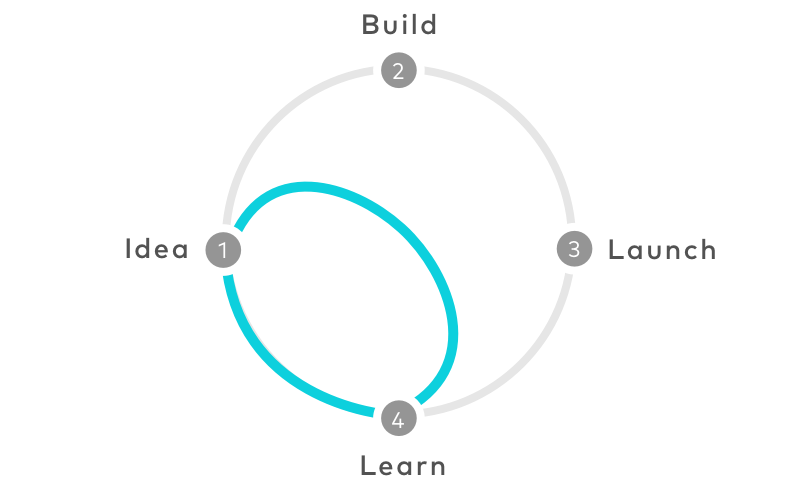 The sprint offers teams a shortcut to learning without building and launching (source: Google Ventures – The Design Sprint).

Wyte plans the various tests with the potential users every month. So far, they have mainly consisted of face-to-face interviews on site, which are also the preferred option according to the Google Design Sprint rules. Of course, the interviews only take place in compliance with the relevant guidelines and safety measures. Due to the coronavirus, a mixture of on-site and remote interviews are now being conducted. In the meantime, Google has also adapted its guidelines to be in line with the remote design sprints. Qualitative interviews are carried out monthly with 20 people in total. The findings are then validated using a quantitative survey involving 100 people.

Before Wyte came to TestingTime, they recruited their test users through a variety of channels. Most of the time, however, they used social media for the recruiting. They put up posts in various social media groups and looked for suitable candidates. Or they used the channels of universities through student employees. Still, all of these options were neither reliable nor time-saving. Wyte was thus soon on the lookout for an external recruiter, and came across TestingTime through a recommendation.

After the Wyte team and Susanne had taken a closer look at TestingTime and tested the service, they soon asked for a suitable offer for their design sprints. Due to the high test volume for their current in-house project, TestingTime made a special offer for this construct. Susanne appreciated the fact that she was able to speak to us in an uncomplicated manner and that we were utterly flexible in putting together the right package for her. This solution already proved to be the right one within the first design sprints, and had a positive impact on the project. Thanks to reliable recruitment, they can test more ideas and solve significantly more problems than before in the same amount of time. This has not only saved them time, but also money.

Thanks to TestingTime, Wyte is able to recruit perfect-fit test users from an international and representative pool for both its own projects and customer projects. When recruiting for customer projects, the desired profiles vary from project to project. It is not always just end customers who are sought for tests, but also business customers, such as decision makers in SMEs or other B2B profiles.

4. Get regular feedback and be honest

Susanne’s biggest learning and biggest tip is to talk openly about ideas and test them as quickly as possible. And not to be guided by the fear that the idea could be stolen during validation. In order to be able to develop a product or service and, above all, to ensure its success, it is essential to collect feedback regularly, regardless of the form in which the feedback is obtained. If possible, you should also do this with people you don’t know, who are unbiased and completely honest. If you test with friends or employees, the results can quickly be biased. Plus, it’s perfectly okay to admit that an idea doesn’t work and doesn’t solve a problem. It is okay to then resolutely not pursue that idea any longer. For Susanne, it, therefore, makes the most sense to think in short cycles. And to test as much as possible.

If you want to know which product Wyte is currently working on, you can find out more about Takkt here. A brief insight: they are building a tool you can use to prepare meetings better, conduct them more effectively, and better track decisions. It is also suitable for recording test results. You can find more information about Wyte here. 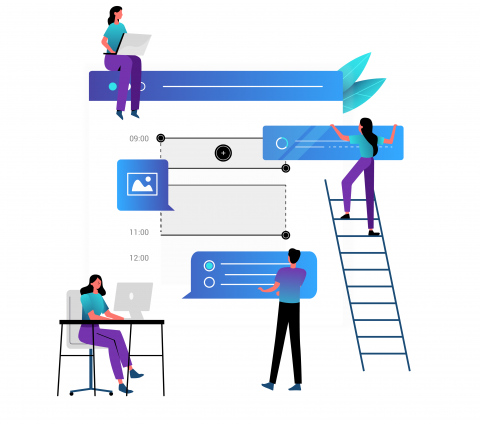